This August, Seattle’s Pike Place Market celebrated its 115th birthday. Since 1907, the iconic market has been home to small businesses, street-performing musicians, fish throwing, fresh produce, and even the first-ever Starbucks.

RadioActive’s Antonio Nevarez went to Pike Place Market to talk to tourists, regulars, and store owners about the market today.

[RadioActive Youth Media is KUOW's radio journalism and audio storytelling program for young people. This story was entirely youth-produced, from the writing to the audio editing.]

n a recent Tuesday afternoon at Pike Place Market, shoppers and tourists were everywhere. I go to Pike Place about once a week, and lately, it feels more lively than it has in years.

Alan Maldonado grew up going to Pike Place Market. Today he’s visiting from Vancouver, British Columbia. It’s been 10 years since the last time he was here.

"It's very nostalgic," Maldonado said. "I used to come here a lot as a kid. It's kind of nice to see that things are different. Like it's evolved, but the core of the place remains the same. It's still a place where people gather, shop, and you can see tons of interesting things."

Ava Suess agrees. Suess is an 18-year-old who has been to the Market many times. But still, Suess said, the Market is a place for exploration. You never know what new stuff you’re going to find.

"Last week, we actually saw the gum wall for the first time," Suess said. "Throughout all the years of living in Washington, I had never been to the gum wall. We went to this cute little honey place upstairs. We got the honey gum, and then we stuck our gum on the wall. And it was the grossest thing ever. But it was so fun.” 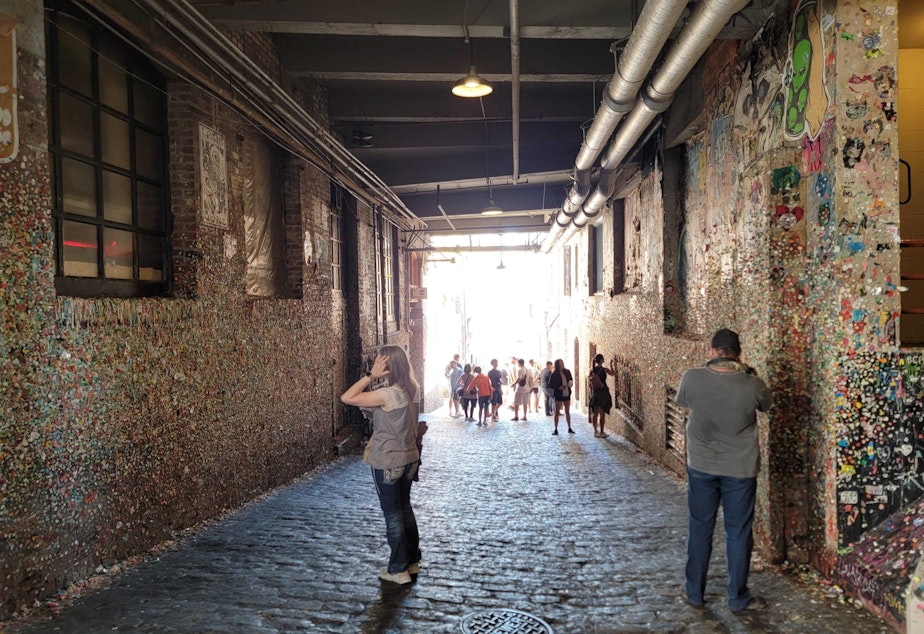 [Pike Place Market has] evolved, but the core of the place remains the same. Alan Maldonado
Credit: KUOW Photo/Antonio Nevarez

A lot has happened in 115 years. Pike Place Market has seen both world wars. It was here during the moon landing and Beatlemania. Pike Place was nearly demolished in the early 70s, but it survived to see the invention of the internet in the 90s, the election of America's first Black president in the 2000s, and the legalization of same-sex marriage in the 2010s.

Most recently, in 2020, the market faced the start of the coronavirus pandemic. Most of the businesses closed down for several months. A state-mandated lockdown took the market from crowded and busy to empty and quiet.

Thomas Marnin and Skye Saylor are a married couple who co-own MarninSaylor, a handmade toy store in Pike Place Market. The store is best known for its "Pastry Pets" — stuffed animals that look like doughnuts.

MarninSaylor started as a booth in Pike Place Market in 2013. Six years later, in late 2019, they moved from a booth to a brick-and-mortar store. But almost immediately, they had to close for two months when the pandemic started.

"It was pretty shocking to go from having the busiest months that we've ever experienced to suddenly being closed," Marnin said. "I felt somewhat despondent. I felt aimless."

Marnin said one of his favorite parts about his job is interacting with customers.

But with the shop closed, those interactions were suddenly gone. And even when the shop reopened, things just weren’t the same.

“When we came back, there was just nobody," Marnin said. "So I'd be in the store just making toys and looking out the window. And I would literally hear footsteps coming down the hallway of the one group of people coming by.”

But as the pandemic went on and the COVID-19 vaccines rolled out, fans of Pike Place Market started returning to its booths, stands, and shops, including to MarninSaylor.

Marnin says lately, the return of customers has reignited the spark he felt before the store closed.

"It reconnected me to the work we were doing," Marnin said. "It gave me that purpose that I had felt before."

Pike Place Market started 115 years ago as a group of farmers and their produce wagons. Now, the market’s red neon sign is as synonymous with Seattle as the Space Needle or rain.

“Pike Place is the heart of downtown Seattle," Marnin said. "A lot of people don't know that every business in Pike Place starts in Pike Place. This is a little coral reef for local small businesses to start. There's no place like it. Thank you, Pike Place Market. Thank you, local people that support the market. This is something that is really special."

This story was produced in RadioActive Youth Media's Advanced Producers drop-in workshop for high school and college-age youth. Production assistance by Marian Mohamed. Edited and prepared for the web by Kelsey Kupferer.

If you have any feedback on this story, you can email RadioActive at radioactive@kuow.org, or use the form below. Reach out. We're listening.

What do your dreams mean to you?

Embarking on an Epic Quest: What I learned at my first Comic Con