Many trans teens struggle in everyday life. Now, add a pandemic and isolation to that.

RadioActive’s Lyn Strober-Cohen set out to find the success and joy happening in trans teens' lives during quarantine.

This story involves sensitive topics like gender dysphoria and transphobia.

Hi, my name is Lyn, and I use they/them pronouns. This story is close to my heart because I am non-binary.

My friends Max and Olive are both trans teens, too. They sat down to talk with me about their experience of growth and success during quarantine.

“I think a lot of trans people are taught to be like, ‘Man, being trans is so hard,’” Max says. “It is! It's really hard. But that's not a trans problem. It's not trans people's fault that it's hard to be trans.”

There is another side to being trans. Even during a pandemic, Olive says they found joy in something they never expected: weight lifting!

“I never in a million years thought that I would ever do it because I hate exercise and weights are heavy,” Olive says. “But it's fun, and I like it.” 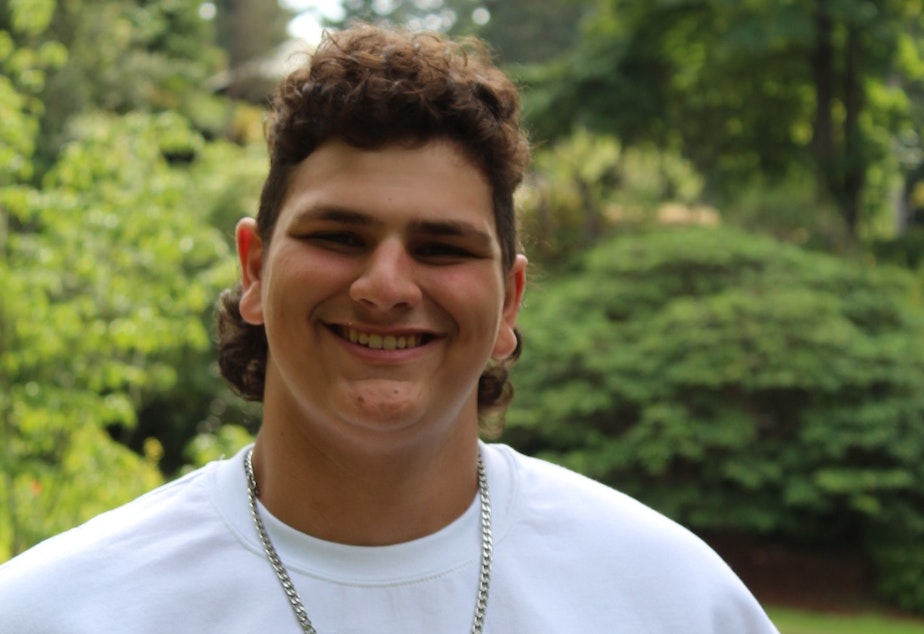 Being trans is hard, you can't deny it. But finding success and pockets of joy in even the smallest things makes you believe anything is possible. Lyn Strober-Cohen
Credit: KUOW Photo / Lyn Strober-Cohen

Trans teens are making an impact on this world through action, advocacy and education, says Eli Erlick. She is a trans activist and co-founder of Trans Student Educational Resources, a national youth-led organization dedicated to transforming educational environments for trans students.

“I see so many new initiatives being started by young trans people,” Eli says. “I know at Trans Student Educational Resources, the current director and volunteers just relaunched a scholarship program for trans students, which is the only one in the country. And then there are also trans teens all around the country who are organizing for Black liberation, for workers’ rights, for all sorts of different movements that may have not been as directly connected to trans folks just a year or two ago."

Action and advocacy come in many different forms. Protesting is just one way to advocate for justice and change. Olive, who is Jamaican American, says that advocating for themselves has been very liberating.

“Quarantine has helped me be my own gender advocate,” Olive says.

Before the pandemic, Olive says they never corrected people who messed up their pronouns. But now?

"I've come out to my personal trainer so that they know how to refer to me," Olive says. "That has been a huge step for me, and it continues to be huge steps. Because it gets easier, but not by much.”

Trans people have always had to stand up for ourselves in the face of injustice against our community and other communities. But sometimes, advocacy can mean looking inward and acknowledging and unlearning our own biases.

Max says that before the pandemic, he often spoke a certain way about gender dysphoria. That’s the feeling of discomfort that can occur in people whose gender identity differs from their sex assigned at birth. But during the the pandemic, Max realized that a lot of the things that they had internalized were based off of pleasing cisgender people.

“I think there were several conversations where I really remember being problematic in my own thinking and the way I was speaking about my dysphoria," Max says. "I was like, 'This is really not how I feel about trans people and my transness. I'm saying these things because I want to please cis people.'"

Media about trans people often defines being trans as hating ourselves, hating our bodies, or making it seem like all we want to do is pass as cis. We are rarely portrayed as people who are just living through our identities.

Media is very impactful for trans people. It allows us to discover our gender identity, even if the characters themselves are not trans.

Olive says that one movie they discovered during quarantine affirmed their feelings.

“They made a film adaptation of the book Stargirl,” Olive says. “And I really resonated with her character. She was actually the first person where I was like, ‘If there was anyone that was going to be a non-binary girl, it would be her.’ And as I sat with that, and sat with my connection to her, and how I felt about her gender identity, I was like, ‘It actually just makes a lot of sense for me to feel that way.’”

Being trans is hard, you can't deny it. But finding success and pockets of joy in even the smallest things—like a character affirming your gender—makes you believe anything is possible.

But right now, we are in a very scary time for trans people in America.

When challenged, trans people have always been tasked with rising above, fighting back, and growing. Because that is the trans way.

If you have any feedback on this story, you can email RadioActive at radioactive@kuow.org or find us on Twitter @kuowradioactive. Or simply click the blue feedback tab on the edge of this page. Reach out. We're listening.

How the pandemic gave me courage to explore my feminine side