Amelia Bonow, a Seattle bartender, wanted to talk about her abortion.

In September 2015, she posted on Facebook: “Like a year ago I had an abortion at the Planned Parenthood on Madison Ave, and I remember this experience with a near inexpressible level of gratitude."

Her friend, the writer Lindy West, shared her post on Twitter, hashtagged it #ShoutYourAbortion, and a movement was born.

People who had abortions and who supported abortions cropped up across social media channels to share their stories with the SYA hashtag.

That energy online quickly transformed into creative energy across all disciplines, from button making to tattoos, even couture fashion, which will be showcased in SYA's forthcoming, self-titled book. It's co-edited by Bonow and Emily Nokes; it includes a foreword by West.

The bright, zine-inspired collection presents as a coffee table book — but instead of innocuous fare, it holds the taboo: essays by people detailing their abortions.

But Bonow’s campaign did not charge forward without criticism. After SYA launched, The New Yorker wrote a mostly positive piece that included this line: "For some observers, the tweets, videos, and even the conversations between Bonow and her friends might suggest a certain amount of privilege."

The piece noted that Bonow lives "in a city where access to abortion is plentiful and where most of the population shares their political views about it."

The book responds to this early skepticism by showcasing people across the U.S. from many backgrounds. They're old, young, middle-aged, married and unmarried, with and without children, transgender, and non-binary. Some are celebrities.

While each one of their stories is unique, none of them are sorry. That is, perhaps, the binding theme throughout this collection. Medical care providers echo this sentiment in the book too, detailing their commitment to providing safe, legal abortions.

We spoke with Bonow to learn about the unapologetic stories and abortion art in the book, and to discuss the new wave of abortion stories being told online right now.

Why are you making abortion fashion?

﻿We can’t have abortion rights without learning to talk about abortion. Why shouldn’t we talk about it with our clothes?

Right after SYA blew up in the media back in September 2015, we had a button making party as a way to celebrate and keep the momentum going. My friend Michael made me a shirt to wear to the party that said “Everyone Knows I Had An Abortion,” which was kind of a joke about my situation but also just very true at that point! Other people started Sharpie-ing and puff-painting their own shirts, and we almost immediately started selling various stuff like this on our website.

Wearing a piece of clothing that tells the world that you had an abortion — or that you support people who have abortions — causes an undeniable ripple effect. You send a message to every single person you see that it is possible to have an abortion without hating yourself for it and taking that self-hatred to the grave.

Read an essay from the forthcoming Shout Your Abortion anthology by writer Kirsten West Savali, republished with permission

What do you say to people who are pro-choice but don't believe t-shirts or other forms of jewelry, accessories or clothing is the right way to communicate on the topic of abortion?

The expectation of silence around abortion isn’t just interpersonal, it’s cultural. Collectively, we need art to help us get comfortable with the reality of complex issues like abortion—it’s easy to act like something isn’t happening when it’s not happening in films, on television, in music.

I think we should be making and engaging with all sorts of creative work about abortion, and of course fashion is part of that. It has been since the beginning. The way I see it, the conversation about abortion is starting to percolate to the surface in all kinds of ways, and stuff like abortion positive t-shirts are a part of the overall change.

For the 44th anniversary of Roe v. Wade, SYA in collaboration with NYC activist crew The Illuminators projected portraits of women who have had abortions along with positive abortion messaging on the Trump Building on Wall Street in New York City. What’s the goal behind art and activism like this?

Increased visibility in all contexts. Regardless of who you are, where you live, your politics, your faith, you know people who have had abortions. Our culture is all warped about abortion because the anti-choice movement has made abortion seem like a bad thing that bad people do, instead of a normal thing that normal people do. SYA is simply empowering people to tell the truth about their lives. That specific installation was one of hundreds of similar actions we’ve done, putting our faces and stories in a huge range of public spaces. People who have abortions are everywhere, and stuff like this forces them to think about that.

When Justice Kennedy announced his retirement, former editor-in-chief of Glamour and Self magazines Cindi Leave wrote an op-ed for The New York Times titled “Let’s Talk About My Abortion (and Yours).”

Have you noticed more everyday people talking about their abortions online?

SYA's initial explosion was a very organic, massive response to the attacks on Planned Parenthood. I think Kavanaugh’s potential appointment has catalyzed another huge wave of online abortion disclosures because it has awakened a similar level of desperation, fear, indignation, and helplessness.

In the days after Leive’s piece was published, I saw a huge uptick in people shouting their abortions on Twitter, specifically saying, "We need to do this again." There was also an incredible piece in Slate, where five staff writers shared their stories. I think that people have a much more intuitive understanding of why SYA needs to exist in the wake of #MeToo. We can’t fight for a better reality when we are not acknowledging the current one, and our silence is being leveraged against us.

When SYA first happened, there was a lot of discussion about the ability to speak being the product of privilege, which of course it is. I was very hesitant to frame shouting somebody's abortion as a political, moral, or feminist imperative. Today, I see a lot more people like Ms. Leive essentially saying, "I don’t necessarily want to talk about this, but I don’t think we have the luxury of silence any longer."

And while the last thing I want is for SYA to be the source of any sort of external pressure, and I totally respect any given person’s choice to be silent, I do think it’s relevant to point out that pervasive silence is damaging and we are all on the hook for it. I mean, imagine if the government was trying to ban pacemakers and no one would admit that they had a pacemaker.

How did making this book broaden your perspective on telling abortion stories?

The book includes 43 abortion stories from people all over the country. Photographer Elizabeth Rudge traveled to five states to meet people, listen to their stories, and shoot their portraits while they chatted. The result is monumental.

Some stories are hilarious, some are heartbreaking. There is a lot of pain. So many of us have experienced sexual violence, rape, abuse. But there’s so much heart in these stories. I cannot believe how much capacity human beings have for resiliency. I also don’t think resiliency is something we can access without processing the things that hurt us.

Read more: I don't regret my abortion. But I wish there had been another way

I’ve spent a lot of time with these stories and working with these people and flipping through this section—I’m so proud of us. We look proud; we should be! We should be proud of surviving all the things we’ve survived, and for choosing to love ourselves.

Justice Kennedy announced his retirement just as we were finishing this book. Now, as I look through the stories in the book, I immediately think about where people are from. Which of these people is living in a state where abortion might be illegal this time next year, where people who do what they did may be prosecuted. Our contributors from Texas, from Tennessee? They knew it might go down like this and they chose to shout about all of it anyway. I can’t think of anything more inspiring than that.

Shout Your Abortion will be released November 1, 2018.

Correction, 5:27 p.m. September 14: The original version of this story did not mention the inclusion of abortion stories from people who identify as transgender and non-binary. 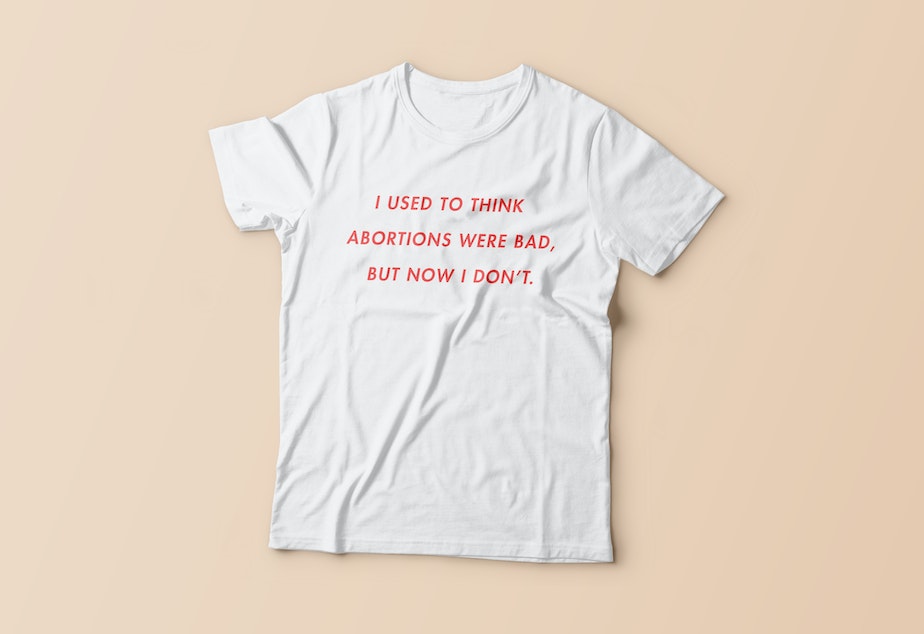 Collectively, we need art to help us get comfortable with the reality of complex issues like abortion—it’s easy to act like something isn’t happening when it’s not happening in films, on television, in music. Amelia bonow
Credit: Christopher Harrell for Shout Your Abortion