It's canary yellow, the size of a Volkswagen Beetle, and weighs nearly three tons.

Located on a tower near Seattle’s Woodland Park Zoo, it's one of the biggest air raid sirens ever built.

It's silent now, but from the early 1950s to the early 1970s, the siren went off every Wednesday at noon. It was loud enough to be heard a mile and half away.

The students at the John B. Allen elementary school right next door — today the Phinney Neighborhood Association — would scramble under their desks, cover their heads and practice their "duck and cover" techniques.

At the time, it was one of 21 air raid siren towers in Seattle (one other also remains at Northacres Park).

They were erected in response “to the Cold War, communists, and the threat of nuclear annihilation," according to a post in the Vintage West Woodland blog.

When the city considered where to install this particular siren tower, the topic came up at a Seattle School Board meeting.

A board member asked if anyone had thought of installing the tower in nearby Woodland Park. But there were objections from those worried about the animals. The Seattle Times wrote about that meeting in an article titled "Siren Might Alarm Wrong Species": 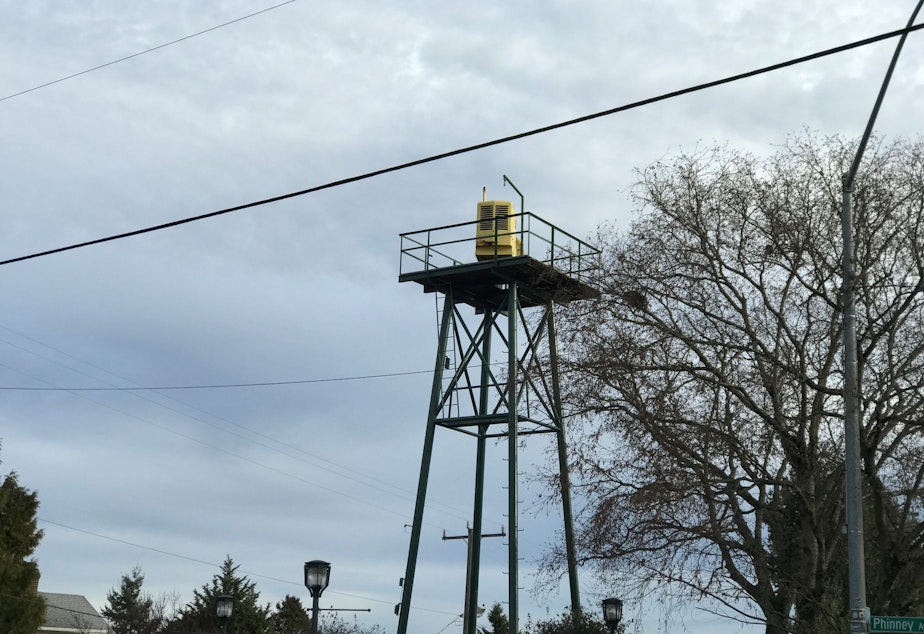 Daily auditory applications of an air raid siren might tilt the inmates of the Woodland Park Zoo off their jungle bred rockers. The whole thing could be explained to schoolchildren. But who is to recite the hard facts of the Atomic Age to the monkeys, the water buffalo, and their fellow creatures at the zoo? march 24, 1953, The seattle times
Credit: KUOW Photo/Katherine Banwell

So why does the siren remain?

By the early 1970s, the Cold War threat had diminished. The school was closed to students and the Phinney Neighborhood Association had taken over the building.

Ed Medeiros is the former executive director of the Phinney Neighborhood Association, a position he held for almost 30 years.

He said that in the early 2000s a neighborhood committee was formed to decide what to do with the siren tower. Should it be torn down or saved?

“One group of people were very interested in making it into some kind of art object," Medeiros said. But there was a stronger voice for maintaining the siren as a symbol of what it represented, the Cold War.

He said some Phinney residents believed it was an important visual reminder of how governments create fear to rally people to their side.

It was decided, Medeiros said, that “instead of thinking of it as a symbol of war, somehow make it a symbol of peace.”

This story was prompted by a listener question.