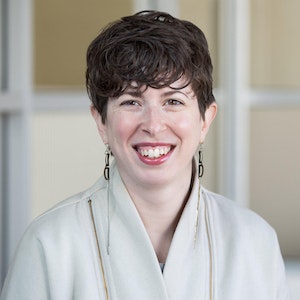 Jenny Asarnow co-manages RadioActive, KUOW's youth radio program. She's reported for national programs including NPR’s Snap Judgment and PRI’s The World. Her audio and interactive work has been exhibited in Seattle, Chicago, New York and Baltimore. Jenny fell in love with radio as a teenager while listening to freeform WFMU near her home town in New Jersey. She learned how to make her own radio stories from fellow students at Brown Student Radio; one of her first stories was a conversation with the automated voice on the Amtrak hotline about an existential crisis she was going through. She loves working with young people because she remembers how fun it is to learn how to make radio stories with peers and she wants to foster that experience for others. Jenny created The Corner: 23rd and Union, a hyper-local participatory documentary about race and class in Seattle's Central District, where she lives. In 2008 she was recognized as one of public radio's 'brightest makers' by Maker's Quest 2.0, an initiative of the Association of Independents in Radio and the Corporation for Public Broadcasting. In 2011, she reported from Haiti as a fellow with the International Reporting Project. Jenny came to KUOW as an intern on The Conversation in 2004 and joined the staff in 2006. During her time here, she has worked on every program in the newsroom. She even worked a stint as KUOW's receptionist. Prior to her current gig with RadioActive, she hosted Speaker's Forum and produced The Conversation.