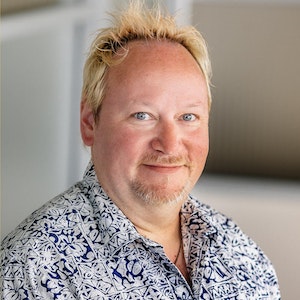 Gregg provides continuity and information during KUOW’s popular weekend morning programming. He also became host of the popular syndicated quiz-show, Says You! in 2017.

He began his radio career in Iowa, then moved to Seattle to join KUOW as Music Director. He later became Operations and Production Manager, overseeing the station’s studios and satellite facilities while producing national programs such as Sandy Bradley’s Potluck, and live broadcasts from the Northwest Folklife Festival.

Returning as an Announcer in 2012 marks his third time on the KUOW team.

He has worked as a programmer of music for use in businesses around the world; a producer of jazz, gospel and Hawaiian-music CDs; a broadcaster at the state’s radio-reading service for the blind; a musician; and a voice actor.